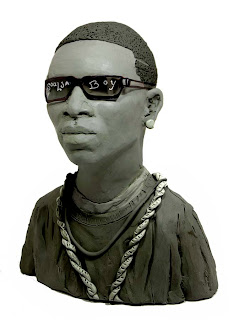 Karen Caldicott shares a recent interview with us.

You started out in the art world as an illustrator, how did you end up making plasticine sculptures?

I actually started out as a painter and sculptor, I received my BA in Fine Art from Hornsey school of art in North London. I did go on to study illustration at the Royal College, but those RCA years, great though they were, did nothing to develop me as a commercial artist. When I first moved to NY in the late 80’s, I made weird and whacky sculptures out of sponge and masking tape, I curated some group shows and lived in a bohemian rat infested Brooklyn loft. Eventually however I decided I had to adapt my work to be able to make a living and illustration was the answer. The model-making started as a personal project, my family members who were so many miles away from me back in England were my first subjects. I soon realized that this style could be used commercially. At that time as a young illustrator trying to make a name for my self (with seemingly constant reinvention) this was a logical step. 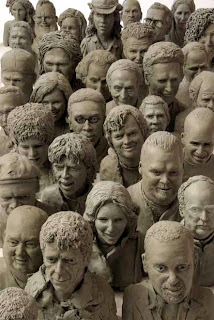 Do you know of any celebrities who have wanted to buy their plasticine representations? Or have you had any direct feedback from the subject of your art?

A few years ago New York magazine commissioned a bust of NY politician Elliot Spitzer who was  running for governor at the time. I made a somewhat distinguished looking rendering of him and he did contact me via his campaign manager. It tuned out my price was too high for him. A few months later the then NY governor Spitzer was in the news again, this time referred to as client #9 in the infamous prostitution ring. So being the opportunist I am, I reworked his bust to fit the moment. The new version being an animated gif with a very red face.  However this is not a rendering that he would like to have on his shelf, so I’m not expecting to hear from him again. Even though it turns out he’s now a neighbour of mine! 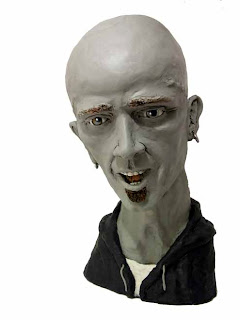 Its not just any plasticine, its Roma #1 .... soft enough but still great for working in fine detail. The fact that it doesn’t harden is also a big plus, I often end up reworking a model months later, this wouldn’t be possible with most other modeling clay. It also gives me the option of completely destroying a head and recycling it in to a different character. (though this isn’t often!) 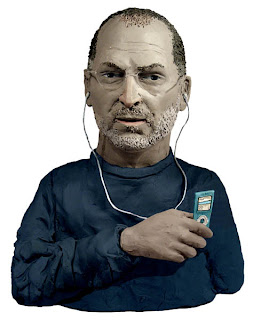 What tools do you use?

A knife comes out for the dramatic cuts, other wise I have a set of wood modeling tools, and then last but not least is a little dose of spit to smooth and shine the surface. 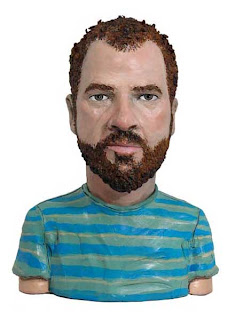 The busts are made from plasticine, would you consider working with other materials? Ice? Metal? Soap?

I’ve been considering simple balsa wood. I’d also like to get my hands on some human or animal hair and a big box of dolls eyes, at the moment I use glass marbles and white paint, more realistic eyes would be great! Its been wonderful to see my models reproduced in bronze I’d like to see more of them taken to this level. 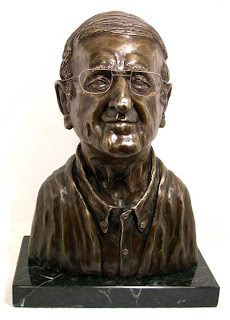 How do you begin the process?

Normally I do my own web searches on the subject. I need to find exactly the right reference material, I’m looking for something along the lines of a police mug shot, full profile, front face etc. As big a file as possible and no blurry snapshots please! An actual sitting with the person would be the best way to go but is usually not possible. The clay process is a rapid cutting away and building up. there's nothing precious about the beginning stage, this is the most enjoyable part in fact! 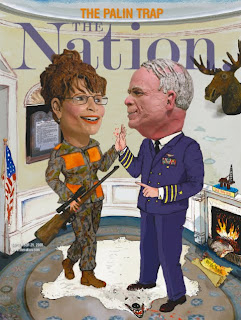 Well I wouldn’t say this was really odd, but it was different for me.

Last year at the heart of the US elections I was asked by the Nation (A US left wing political mag) to make a cover lampooning the infamous Barry Blitt New Yorker cover.....You may remember it depicted the Obamas as terrorists in the white house, assault rifle and all. I decided the best way to approach this was to collage together two styles. The heads of Palin and McCain, (plus a moose head and rifle.) were made in clay, the background and bodies were drawn and all was put together in photoshop. The cover was well received if not as controversial as the original. The oddest “job” I ever had was "lambing" With absolutely no knowledge or experience I was given the task of looking after a couple dozen ewes. Being as though this took place in the depth of an upstate NY winter I unfortunately lost most of the baby lambs by virtue of them being frozen to the snow covered fields. Hellish!

Who or what are your influences?

I’m constantly stumbling upon artists on the web whos work is of interest and I admire, there's so much great stuff out there! I post the links to many of these artists on my blog “little clay bits”

Living in the country (the middle of nowhere) I’m able to clear my head with long walks, riding a bike or skiing (depending on the time of year) this is really beneficial to my sanity and can also help with straightening out work related problems. The occasional trip to the frenetic New York City is needed every now and then also.

Queen Elizabeth II. Maybe a series of tyrants, and I'd love to do some fashion spreads.