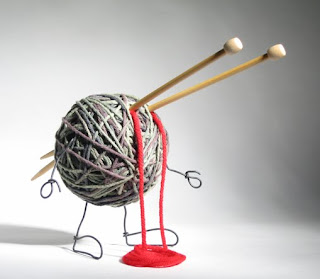 The other day Chris Sickels of Red Nose Studio fame sent me a link to this amazing blog incase it might be of interest for the 3D blog... was it ever! I was blown away and immediately got to in touch with Terry Border of Bent Objects. 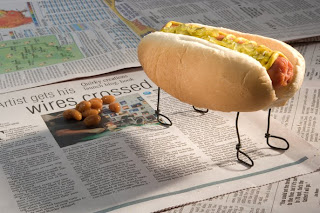 How did you start to work dimensionally?
I've always been more comfortable working in 3D.  My drawing skills never get out of the realm of the doodle.  I also like to tell the story of how I started working much larger, making mobiles and sculptures, and after I failed to sell several of them, I decided to start working smaller. As I started working smaller, I got more relaxed, and started to have more fun. My work really took off shortly afterward. 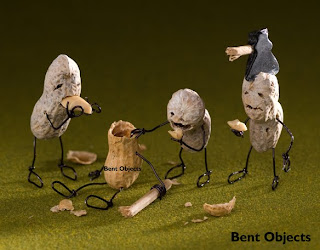 Who is your biggest influence?
Easily Alexander Calder. His early wire work is what I strive to match in joyfulness, and simplicity.  I got to see the "Alexander Calder: The Paris Years" last summer, and could have died of happiness as I walked through and took it all in. 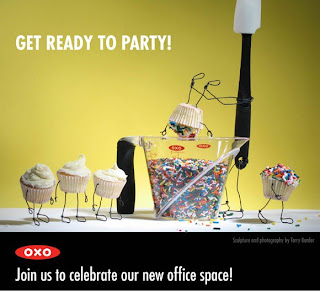 Could you describe your  working process?
It depends. Sometimes I see an object, or think of a concept that is already fully formed, but that doesn't happen nearly as often as I would like. Usually I start with an object and try to anthropomorphize it.  What kind of life would it lead?  What things would it have in common with us? Hopes and dreams, fears and failures?
The next step is to probably make some wire arms and legs for it. It's funny, I started out doing everything in wire, but it's dwindled to mainly arms and legs at this point.  If I need props, I gather those up. Sometimes I make the props, a lot of times I'll find them in my daughter's old Barbie accessories, or buy them from a miniature store- whatever is best.
The third step is deciding on the setting.  Does the image need more than a seemless background?
Finally, I'll spend anywhere from half an hour to all day lighting the image. Sometimes I'll take 40 or 50 shots, making changes in posing, and lighting.
The real final step is after the shot is done, and I'm happy with it all, I have a nice cold beer or glass of wine. 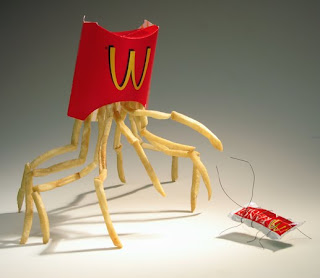 What are you working on now?
My book "Bent Objects: The Secret Life of Everyday Things" came out in stores last October and seems to be doing well. I'm now keeping my blog fed, trying to find some more commercial work, and hoping and praying that I get another book deal going very soon! 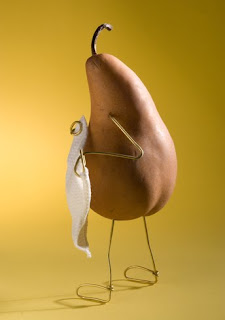