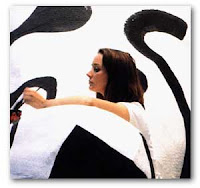 I thought I'd make Friday a day for posting about an artist from the past who has created dimensional work. Here is a personal favourite of mine, Niki de Saint Phalle, who had a huge influence on me from the moment I learned about her in foundation year art history class at Parsons (thanks to Sharyn Finnegan!). Niki made me think that bigger things were possible.

The following excerpt is taken from http://www.oneroom.org 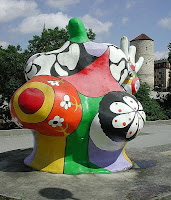 Niki de Saint Phalle was born in 1930 in France. She began producing her first paintings in 1950. This led to assemblages in plaster and her "shooting paintings". These pictures were plaster with containers of paint beneath the surface which would explode when shot with a pistol. More sculptural assemblages followed and in 1965, de Saint Phalle created her first "Nana". These large, voluptuous and brightly painted female figures were made originally in papier mâché and later in polyester. 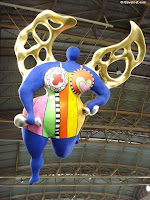 De Saint Phalle has designed stage sets and costumes, created movies, graphic work, chairs and a sculptural playground. One of her large works includes a giant Nana that can be entered by walking through the vagina. In additon, she and her son produced a book for children about AIDS and she even has her own perfume. 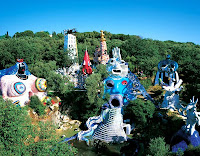 A part of her most ambitious work is pictured here, the Tarot Garden, a sculpture park in Tuscany. The Wheel of Fortune in the water was created by her husband, Jean Tinguely. The Tarot Garden features mirrors, glass and ceramic mosaics. De Saint Phalle had never used these materials before and they show the influence that Antonio Gaudí had on her work. This park contains Nana-like figures as well as the "skinnies" which proceeded them. Serpents, fountains and sculptures you can walk into are often a part of her work. They appear here on a grand scale. There is a fun, theme park quality to the place with its bright colors and sensual rounded forms covered with elaborate surface designs. A relation to "outsider " art such as the Watts Towers can also be seen in this playful portrayal of the arcana of the Tarot deck.