Originally I had reserved Fridays for looking back at dimensional artists from the past, but I had to post this article after I read it in the Herald Tribune. David O'Keefe has always been an inspiration to me and a wonderful friend since I met him. I'll be posting his work and his interview answers in the coming weeks but for now, enjoy this article by Billy Cox, photos by E. Skylar Litherland. 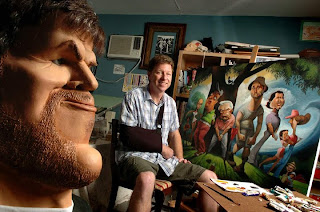 By Billy Cox
When editorial cartoonist David O'Keefe got his pink slip from the Tampa Tribune it almost took his breath away. 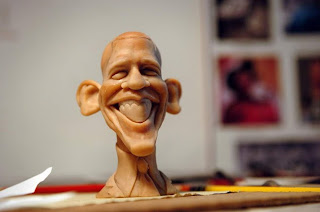 He'd spent 27 years at the Trib, the first 10 driving trucks as he waited for a newsroom opening. Once inside the art department his flair for compressing politicians, entertainers and athletes into wicked clay sculptures and caricatures found a national audience. The likes of Time, Sports Illustrated, and Mad magazines showcased his work. His footing seemed secure.
"There's just no Plan B. It was gonna be this or nothing," recalls O'Keefe. "Or maybe a sign painter."
Then, two years ago, the Trib announced its first round of layoffs. O'Keefe's talents became a luxury item. In the blink of an eye, this middle-aged father of four with a penchant for elasticizing reality found himself in the midst of his own horrid cliche, a regular Wile E. Coyote in mid-air atop a fizzled Acme rocket. 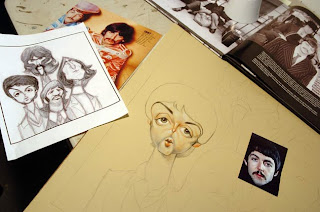 But instead of whistling into the floor of the Grand Canyon in a poof of dust, O'Keefe has apparently landed on his feet -- at 12 North Boulevard of the Presidents, next to Columbia Restaurant on St. Armands Circle. The resurrection is under way at the newly relocated Wall Art Gallery, a collaboration between O'Keefe and Wall Art owners Chris Cinelli and Robb Makin. The energy on O'Keefe's end comes from business manager Wayne Curtiss, convinced that "David is just on the edge of really taking off."
The most ostentatious show of faith is O'Keefe's "The Godfather," the studio's visual centerpiece featuring the major goons and brains behind the Corleone family. Sticker price: $90,000. 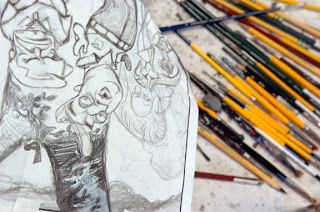 If that sounds like a lot, consider that O'Keefe recently completed a "Caddyshack" assemblage (Bill Murray, Rodney Dangerfield, Ted Knight, etc.) for a commission well into five figures. His patron is Steve Garske, the Par Aide golf mogul from St. Paul, Minn.
But Curtiss says the real magnet will likely be the more accessible inventory. O'Keefe's artwork has been transferred onto puzzles, T-shirts, and even Studio wine labels. "The Godfather," for instance, is pasted on bottles of "Horse Head Red."
"There isn't a person who comes in that doesn't leave with a smile," says Curtiss. "We want them to be able to take something home."
Meanwhile, back in Brandon, far from the business he admits to knowing zilch about, O'Keefe looks like a goofy character emerging from one of his own paintings.
Please click HERE to read the rest of the article!