Raised on Hollywood, sports and rock and roll music, David O’Keefe has an acute awareness for the images and personalities that have colored the lives of his generation.  He just sees things differently – more intensely, edgier, somewhat more perspicuous than the average spectator. The pop culture icons that we idolize, glamorize and glorify, O’Keefe visualizes for us in all their humanness as well as their stardom. An editorial illustrator for over 25 years, O’Keefe began his art career at The Tampa Tribune as a promotion artist, dabbled in editorial cartooning under mentor, Wayne Stayskal, and spent several years as the Special Projects Illustrator for the newsroom. 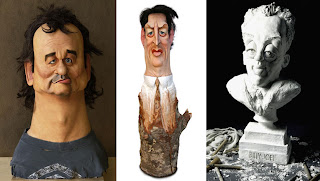 His sardonic caricatures and humorous illustrations also appeared on the covers of Sports Illustrated, Sports Illustrated for Kids, Mad Magazine, The Village Voice and within the pages of TIME.  His advertising clients include Coca-Cola, WaffleHouse, Fuji and SunCom Communications. In 2007, David left his day job to pursue his passion of painting and sculpting pop culture icons. O’Keefe’s work is transformative, capturing not just the likeness of his subjects, but their personalities as well. He has recently released an epic depiction of the characters from The Godfather and of the entire I Love Lucy cast. His company, David O’Keefe Studios distributes his work through galleries across the country and in Europe.  David O’Keefe Studios also operates a solo gallery on St. Armand’s Circle in Sarasota, Florida. O’Keefe’s work has won numerous awards from such organizations as The Society of Illustrators (NY and LA), American Illustration, Communication Arts, National Headliner Awards, Dimensional Illustrators, and the Society of News Design. He considers himself blessed to pursue his dream and finds great joy in his work and in his family. O’Keefe currently resides in the Tampa Bay Area with his wife, Janice and their four children. 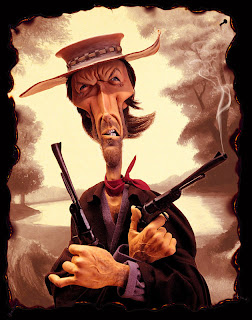 How did you start working dimensionally?
I started working dimensionally back in the mid-1980s, creating larger than life paper mache sculptures of the likes of President Ronald Reagan and the then undefeated boxer, Mike Tyson.  I've always had a passion for caricature and working dimensionally seemed like a natural progression. I experimented with other sculpting mediums, including plaster of Paris for a Billy Joel bust (Mozart style). This is my first sculpted illustration to win an award and bring me national recognition as an illustrator. In order to create dimensional illustrations for editorial deadlines, I had to work faster and smarter. About this time, a friend introduced me to super sculpey polymer clay.  My first big break came from TIME Magazine and art director Ken Smith. Their first commission of me was an illustration about AT&T layoffs. Unfortunately, the art was killed after completion ("too harsh") and I was crushed, but Smith soon gave me another chance to humorize "Mad Cow" disease and British Prime Minister John Major. In the early 1990s, there was no affordable digital camera, photo imaging software, or the internet.  I would get an assignment from TIME on Monday, fax sketches to the art director the same day and usually get a final sketch approval by Tuesday evening or Wednesday morning.  Then I would sculpt like mad to the camera's eye only (leaving back sides unfinished,) paint a background or build a set, have my photographer come to my studio Thursday night and shoot a large film slide for the highest resolution.  A courier would pick up the finished slide early Friday morning at my home outside Tampa to take back to NYC to meet TIME's Friday 8 pm deadline.  What a rush! Literally. 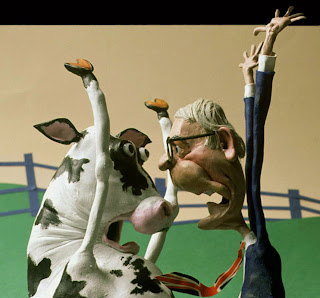 What or who has influenced the way you work?
Aside from the old master painter Peter Paul Rubens, people who have inspired me over the years include the incredibly talented illustrators Ronald Searle, Carl Giles, Carter Goodrich, Edward Sorel, Sempe, Peter de Seve and sculptors Damon Bard and Michael Defeo. I have had the pleasure to work with outstanding art directors like Ken Smith (TIME), Minh Uong (The Village Voice) and my Tampa Tribune AD, Pat Mitchell.  All have had a huge impact on my career. 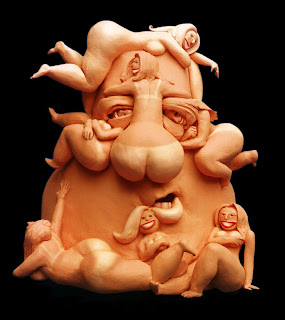 What do you enjoy the most / least about working dimensionally?
As editorial budgets got slashed, it just didn't pay to continue doing editorial assignments.  A perfectionist, I became increasingly more dissatisfied with the quality of my work on such short deadlines. I really wanted to sculpt for more than just a photograph - to finish all sides and truly capture the essence of my subject's personality.  Today I do a lot of oil painting and work on smaller, finished sculptures.  I like to incorporate realistic details such as human hair wigs, doll eyes, moles, wrinkles, and clothing.

Please describe your working process.
Before I start any sculpture, I first come up with the concept and initial sketch of the person(s) I am going to sculpt.  Then I study videos and photos of the subject from all sides.  Video is especially important in capturing a person’s mannerisms and nuances.   I then study the source images side by side, and then amalgamate the person’s likeness into my own style.  I won’t start sculpting until I have sketches from all sides. Today, I photograph my own work with a digital SLR camera. 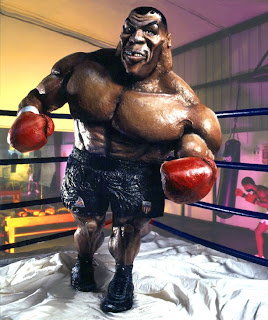