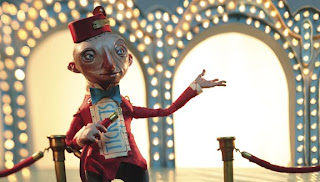 Chris Sickels welcomes us into the amazing world of Red Nose Studio. His illustrations appear in advertising, magazines, books, newspapers, packaging, character development and animation. His work has been honored by virtually every award institution or annual. 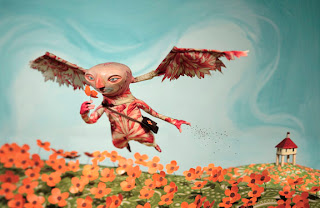 How did you start working dimensionally?
While finishing college, I saw some puppet performances by Mark Fox that were full of movement, lighting, sounds, smells, textures, and when i would go back to the studio to paint, myself and fellow painters would talk about how after seeing one of those performances, working on a painting seemed so still and dead. Eventually I started trying to create puppets of my characters. This is how I got hooked on building things, it all tied back to the toys I tried to make as a kid. So over time while I was illustrating as a painter I continuously worked on building puppets and trying to find a way to use them in my illustrations and after about 3-4 years of trial and mostly error, I was able to have an art director that had enough confidence in my work that she was willing to give the 3D work a shot. 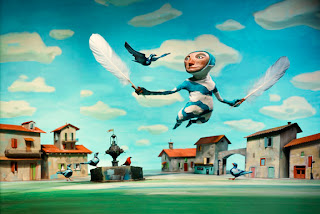 What or who has influenced the way you work?
While working as an art handler at the Contemporary Art Center in Cincinnati in the late nineties, I helped install an exhibit of Tim Hawkinson's work, meeting somebody like him and seeing how he manipulates materials and constructs his sculptures, really opened my eyes to how someone can create things beyond just oil and canvas. The list of influences runs on and on from Dave McKean and his 'Mr. Punch' graphic novel, the stop-motion work of the Quay Brothers, Nick Park, the puppet performances of Mark Fox, Eric Sanko, and seeing the footage of Alexander Calder performing his Circus. The most important influence on the way I work is my growing up and working on a small family farm, I was taught how to use what you have on hand to fix/solve the situation that arises. Watching my Grandfather, who able to fix just about anything with a pair of pliers and some wire. To this day, wire is is the core of all my figures. 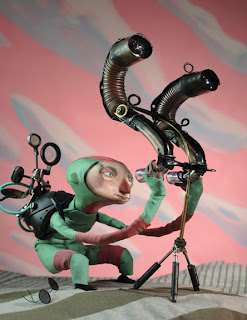 Please describe your working process.
Sketching , Sketching and more drawing, this is where it all starts. Once a drawing can successfully convey the concept, everything gets built from there. Often I do some very rough watercolor studies and dig thru drawers of fabric to establish a palette. The camera angle/ viewpoint is kept in the forefront of the building process, so things can be created efficiently, much like a stage or movie set. The facial expressions of the characters play a large role in my images, so considerable attention is put on the sculpting of the figures and the rest of the environment is built as it needs to be to help direct the viewer through the composition. Lighting the set and adjustments to the camera angle and figure position are made up until the final shot. It usually takes at least 100 test shots throughout the process until everything seems to fall into place.

What do you enjoy the most / least about working dimensionally?

MOST: Visual problem solving, coming up with concepts, the ideas. Being able to work in all facets of art- drawing, sculpting, painting, building sets, making props, costumes, photography, and lighting to create my own little worlds. LEAST: Not sure, probably space constraints, and the fact that I think I am on am mission to find the most difficult way to create illustrations.

Red Nose Studio has been featured in Communication Arts, HOW, Print, Creativity and 3x3 Magazine, as well as in a number of art and design books including Taschen’s Illustration Now!. He has twice been honored with the Carol Anthony Grand Prize award from the Society of Illustrators 3-D Salon. Two of his short films, The Red Thread Project and Innards, were selected to screen at the 2005 and 2006 Los Angeles International Short Film Festival. He authored and illustrated The Look Book, and has illustrated the children's book Here Comes The Garbage Barge that will released in February 2010.